What Is MIDI? (Everything You Need to Know)

Ever wonder why making music in the digital age is so great? One reason has to be the relative ease with which you can access a variety of tools and techniques.

In the past, if you wanted a string section, you had to hire professional string players. If your drumming wasn’t on beat, you had to record it endlessly until you got it right.

If you couldn’t play an instrument, well, making music would be an uphill battle.

All these issues that used to make recording much more difficult are no longer a problem. All thanks to this wonderful invention called MIDI.

MIDI stands for musical instrument digital interface. It’s among the most valuable tools in a producer’s toolkit.

It doesn’t matter if you’re a bedroom producer just starting out. Or maybe you’re a seasoned vet working in a world-class facility.

The singer-songwriter using a software instrument to add a violin to her acoustic ballad? She’s using MIDI.

The DJ using sequencers to sync their drum machines and turntables? Yep, you guessed it: MIDI.

MIDI is all over almost any track you hear these days, especially ones produced digitally.

So let’s dive in and see how this technology works. We’ll also see how you can use it to broaden your music-making possibilities!

But if you just want to learn about MIDI specifically, keep reading.

In short, MIDI is a way of sending data to easily make music.

It may be best to think of MIDI as a language. One that allows computers and digital devices to communicate with each other.

They allow you to “control” your music via the language of MIDI. They come in all forms, from MIDI keyboards to MIDI drum pads.

When you play notes on a MIDI keyboard connected to your computer, you’re not playing music. You’re sending data.

The data you send is a set of instructions for what your computer should do when it receives MIDI data.

Virtual instruments are also known as software instruments. They are any instrument that lives inside a computer and doesn’t make external sound.

Virtual instruments can only be “played” with MIDI.

No matter what DAW or computer you have, it can talk to any other MIDI-equipped device.

MIDI has become essential to making music today. As a result, most synthesizers and electronic keyboards have a MIDI component.

As we mentioned above, MIDI does not involve recording audio. MIDI is just a string of data.

It doesn’t send an actual audio file that you can play and listen back to. However, as we’ll see later, the MIDI files and data can be converted to audio if you want to do so.

You might be asking what all the fuss is with MIDI.

Well, one major advantage of working with MIDI is that it’s flexible. Once you’ve created or sent MIDI data, it can be transferred or edited with a few mouse clicks.

Working with MIDI is also an easy way to make music quickly. It allows you to make music without having to actually record anything.

This can be a great way to lay down tracks if your recording location is too noisy. Or maybe you’re traveling and don’t have access to microphones.

Finally, the files that contain your MIDI data are compact.

This means that MIDI files are much smaller than a full audio file.

Let’s continue to think of MIDI as a language. If you’re fluent in a language, you can use it both to speak to others and listen when others are speaking it to you.

Devices that are fluent in MIDI—meaning they can send out or take in MIDI data—function the same way. Except they “speak” and “hear” through outlets for cables called ports. 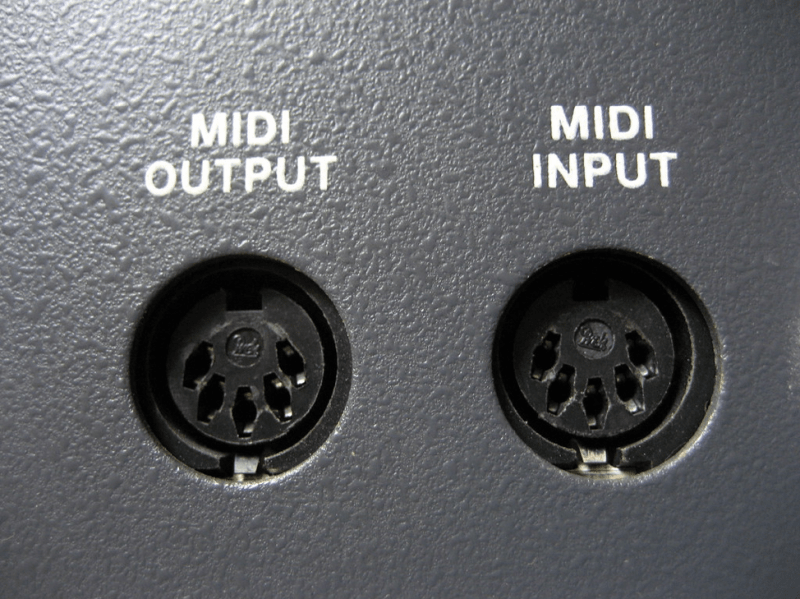 There’s also a third type of port on some MIDI devices called MIDI THRU. This port lets a device copy incoming MIDI data and send out a string of identical data.

MIDI THRU allows MIDI devices to send or take in identical information. So it can be very helpful if you’re linking multiple MIDI devices.

For example, if you wanted several synthesizers or drum machines to be synced to the exact same tempo.

Instead, we use specific MIDI cables, which have five miniature pins. 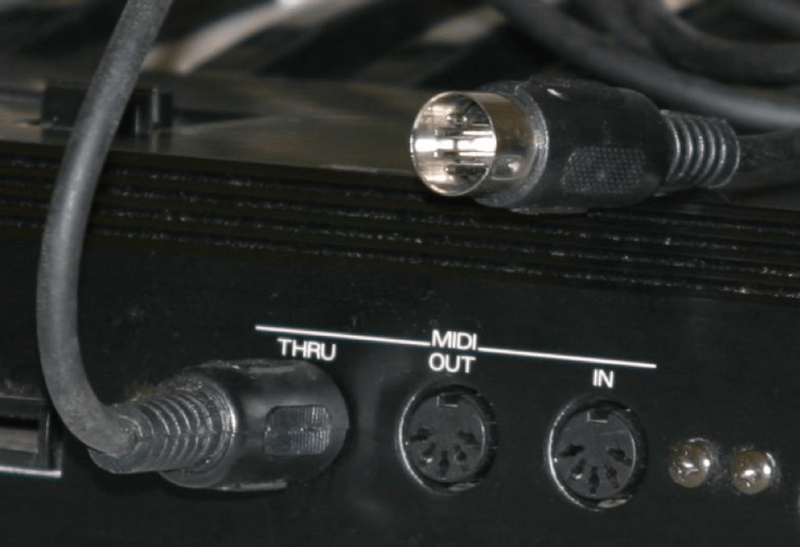 MIDI can also be communicated over USB.  This can happen in a few different ways.

One way is that you can send MIDI data to a MIDI interface that’s designed for this exact task.

MIDI interfaces can be thought of as translators. They convert MIDI data to instructions that a computer can read.

The interface then sends the data to your DAW via USB.

Alternatively, you can use a specific MIDI-to-USB cable. It lets you bypass a MIDI interface and send the data directly from your device to the computer, as shown below. 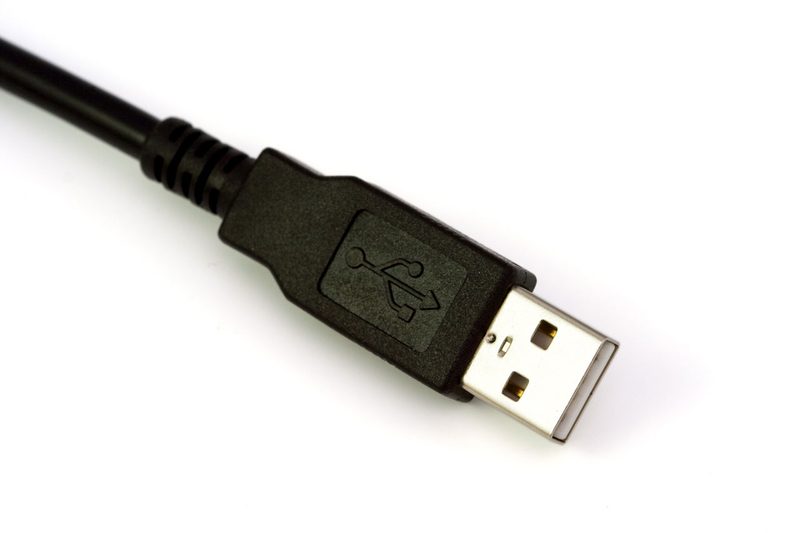 The cord has a MIDI plug on one end and a USB plug on the other.

Some MIDI devices even have their own USB ports that allow you to use a USB-to-USB cable.

To determine the best approach for your devices, consult the manual or specifications for your MIDI controller.

So now that we know what MIDI is and what it does, let’s dive into the world of using it to make music!

To get started, you need some way of creating MIDI.

For this example, we’ll use what is probably the easiest setup of generating MIDI. A MIDI keyboard connected directly to the computer via a MIDI-to-USB cord.

In our example, the DAW we’ll be using is Logic Pro X.

It’s important to note that not all MIDI controllers come in the piano format. 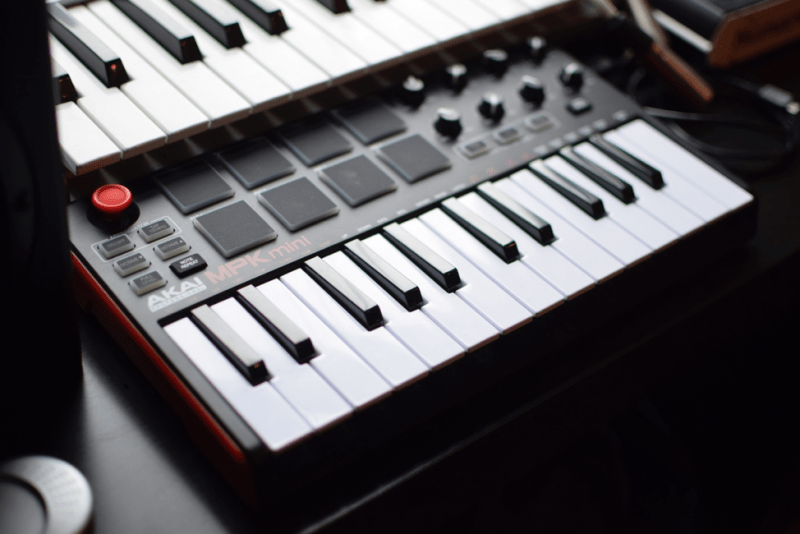 Other types of controllers include drum pads, samplers, and sequencers. 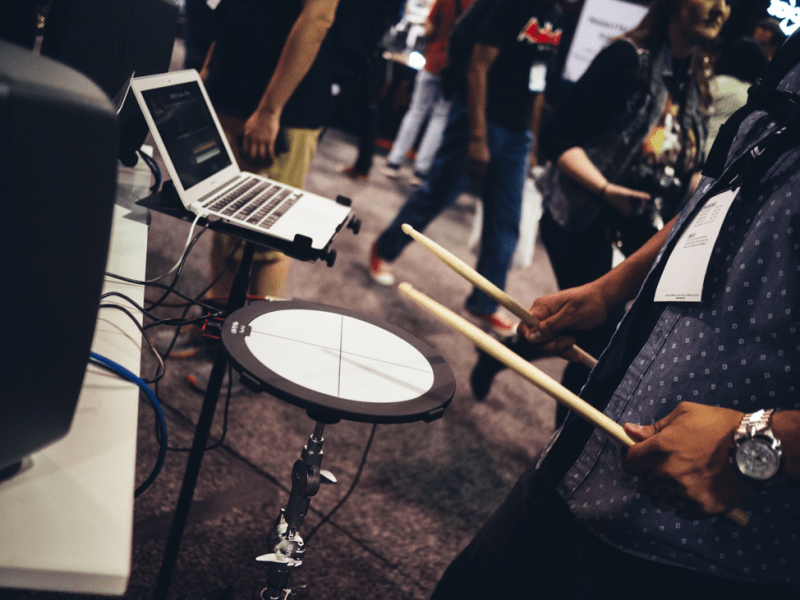 Let’s start by connecting our MIDI keyboard to the computer with a MIDI cable. Plug one end of the cable into your keyboard’s MIDI OUT port, and connect the USB to your computer.

Create a new Software Instrument track with the instrument you want to play. 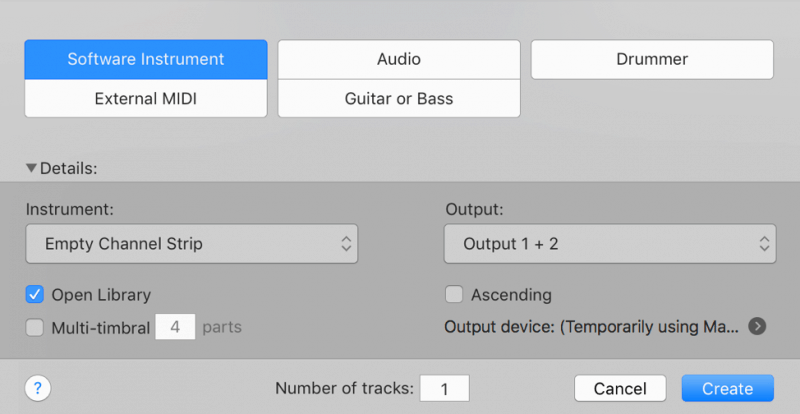 Confirm that your keyboard and DAW are connected by playing a few notes, and you’re off!

While using a software instrument with MIDI is great, it’s not the only way to use your MIDI controller.

Sometimes, you may want to use external MIDI instruments.

You can trigger hardware synthesizers or samplers. Or you might use a software instrument in an entirely different DAW.

To do this in Logic, create a new External MIDI track rather than a Software Instrument track. 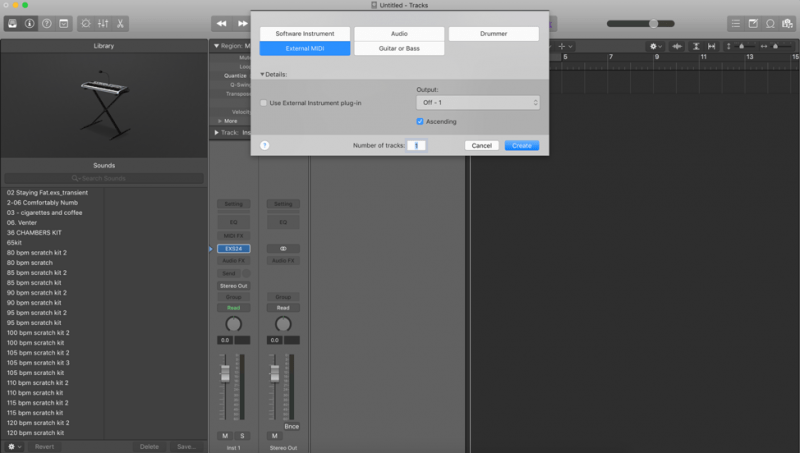 This kind of track routes the MIDI data to an external destination and then back into the DAW.

Try playing your first few chords. When you play each note, the MIDI controller talks to the DAW by sending several messages.

Here are some of the messages that are sent:

Depending on your MIDI controller, you may have other possible messages that can be sent.

For example, my MIDI keyboard has a built-in pitch wheel. I can use it to modify the pitch up and down.

The operations in your DAW for recording MIDI are the same as for recording audio. Press the record button to begin, and when you’re finished, press stop.

MIDI in Your DAW

Remember when we talked about how flexible MIDI can be? Let’s look at that flexibility in action.

After you’ve input the sections you want to play, you can go into your DAW and edit or change the performance.

Want to add, change, or delete certain notes? Double-click on the section of MIDI you’ve created.

This opens Logic’s Piano Roll Editor in a bar below the main track arrangement. The Piano Roll shows MIDI notes as colored blocks, along with the pitch, velocity, and length.

Most DAWs have something similar for easy manipulation of MIDI data. 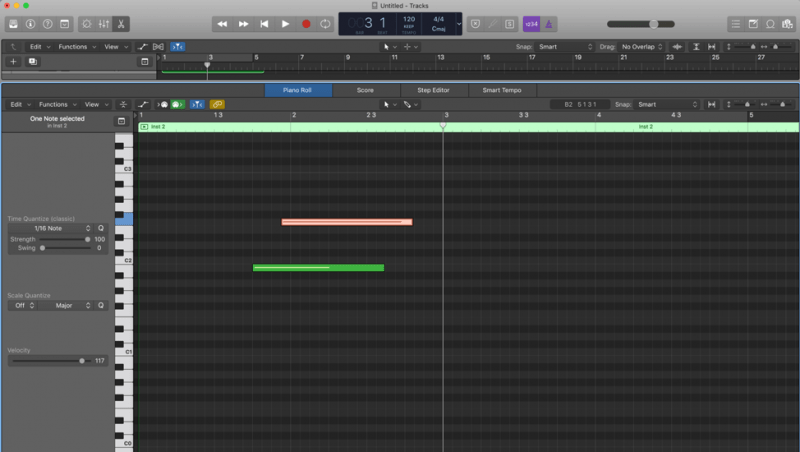 Try selecting a note with your mouse and moving it around.  You can change which notes play and when.

Alter the velocity of the notes, duplicate notes or make new ones, or delete ones you don’t want to hear. The world is your oyster!

NOTE: If you want to learn how to make your MIDI strings sound more realistic, check out this video:

You can also go back and add more MIDI data over the previous performance.

This means you can, for example, record a drum beat one piece at a time. Record a different part of the kit with each pass-through.

In fact, you don’t even need to use an external MIDI controller to make music with MIDI.

Many people like the familiarity of controllers that are similar to real instruments. But you can also create MIDI tracks with your mouse and computer keyboard.

In Logic, you can do this by right-clicking in the track and selecting Create Empty MIDI Region.

You can then go into the Piano Roll section—located below the tracks—and pencil in the notes and chords you want to hear.

Want to change the software instrument after you’ve already recorded the MIDI part? Go to the track you’ve just recorded and scroll through all your available instruments.

You can select any instrument you want. The performance will be exactly the same no matter what you choose.

This is a fantastic way to quickly try new arrangements with different instruments.

For example, you may want to see how each of your various synth strings might sit in a certain mix. So you can play the section and then cycle through until you find the sound that works best.

Maybe you played the section a little bit off and want to make it more rhythmically tight. An advantage of MIDI is that the notes can be adjusted to be perfectly on the beat.

This process is called quantization.

For example, if I want to quantize a MIDI performance in Logic, all I need to do is go to the left sidebar under Region.

I can select the note I want to quantize to, and my performance is immediately in perfect rhythm. 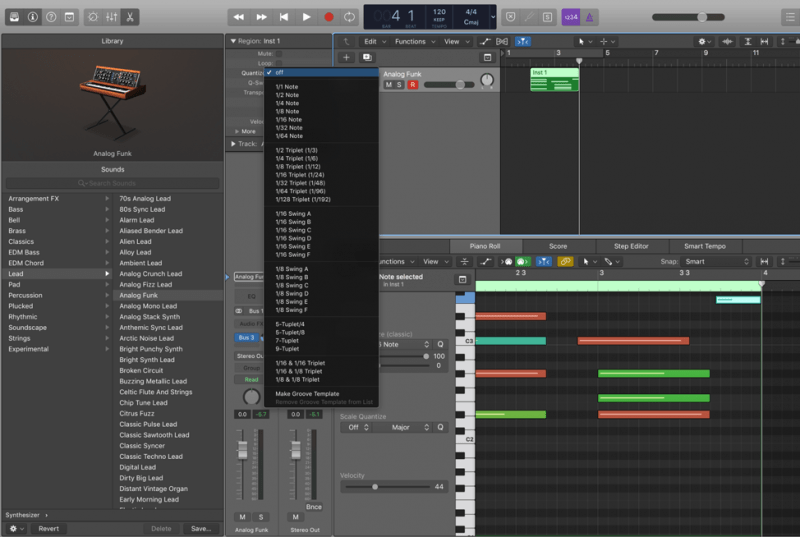 I’ll quantize my performance to quarter notes. That means all my notes will hit every one-fourth of a measure. 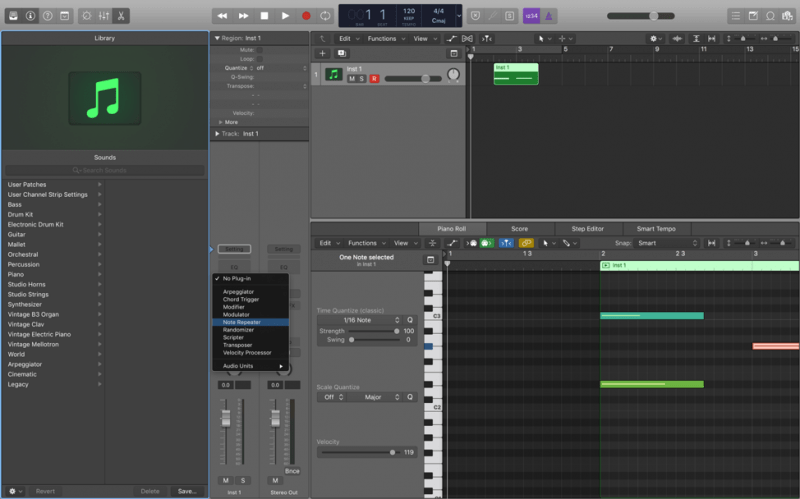 Just like it sounds, this effect will repeat each note a certain number of times. 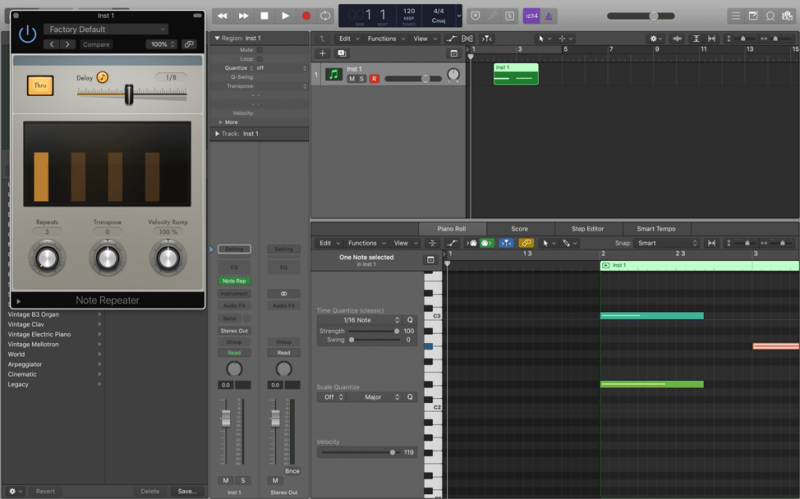 There are a few other types of MIDI effects in Logic.

The Chord Trigger effect will trigger a different chord for each note you hit. And the Arpeggiator creates different note patterns for each MIDI note.

Want to convert your MIDI to an audio file? This is fairly easy to do in most DAWs.

In Logic, if I right-click the MIDI region, an option appears to Export as Audio File. I can then export and save the track as audio files to my computer. 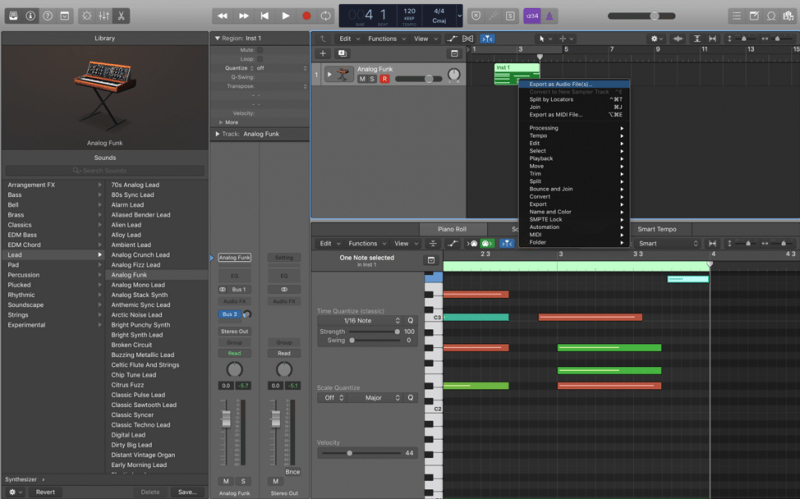 UPDATE: We released a great video that can help you get some inspiration, using MIDI FX:

CONCLUSION: What is MIDI?

MIDI is an essential tool for the modern music producer. Especially given its flexibility and ease of use.

Not only can you “play” just about any instrument, but you can also add effects.  The possibilities are endless.

Hopefully, this article gave you the inspiration to integrate MIDI into your music-making process!