The moment “Get Lucky” hit the radio, it was an instant hit.

There are a thousand reasons for this. From Daft Punk’s flawless production to Pharrell Williams’s casual cool vocals.

BUT in the song’s compositional fine print, there’s one thing you may not know

that knocked this song out of the park…

“Get Lucky” was written in the Dorian mode!

Say what? What does that even mean?

Follow me. This will bust your songwriting wide open.

But if you just want to learn about Modes specifically, keep reading.

A mode is a different way of playing a scale – it uses exactly the same notes but starts in a different place.

For example, we’d usually play the C major scale starting on C. We’d go up, playing each note in the scale until we hit C again.

But what if we started on D instead? We’d play all the same notes from the C major scale, but we’d start and end on D.

The whole scale would have a totally different feel!

The notes wind up having a different relationship to each other. And that produces a different sound and emotion.

There are seven modes in total, and you already know two of them: the major and minor scales.

C major and A minor have the same notes, but start on different root notes.

Here are the seven notes in a C major scale: 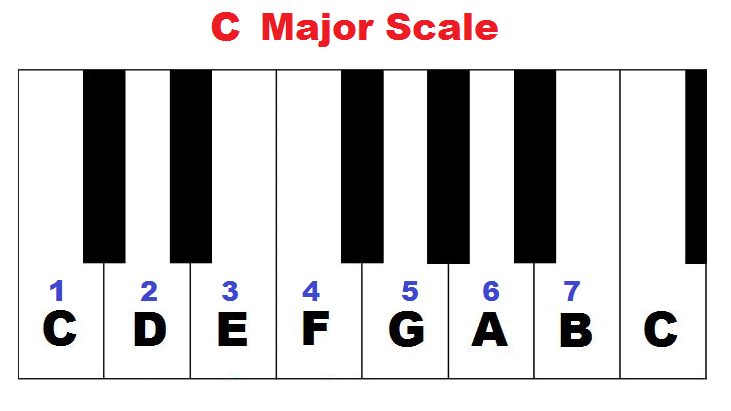 What makes it sound major is the particular order of the whole and half notes.

No matter which of the 12 major keys you’re in, the intervals between these notes will be the same.

A minor is a different mode of the C major scale. It starts on A, the sixth note in C major. 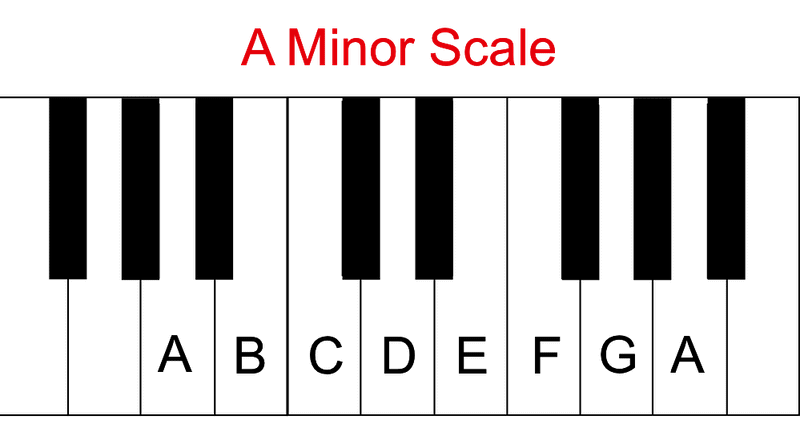 The pattern has a slightly different order of whole and half notes.

This formula is the same for all 12 minor keys.

By changing the starting note of the scale, our ears hear a different “home” or root note. It has a totally different sound that we recognize as minor.

Yet, these two scales are related and share exactly the same notes!

Welcome to the Family Mode!

Since there are seven notes in the major scale, you can actually play it seven different ways. It all depends on which note you start with.

Together, they’re called modes, all derived from those seven notes of the major scale.

Each mode has a name derived from a different region of Greece.

The major scale has its own modal name too – it’s the Ionian mode, and the minor scale is known as the Aeolian mode!

To meet the rest of the mode family, I’ll use C major as an example. Here are the notes used in C major.

And here’s the pattern of intervals (the gaps) between the notes.

But if we start that scale on the note D, now it looks like this:

And the order of whole and half step intervals has changed.

This mode is called the Dorian mode. It doesn’t sound major or minor. It sounds Dorian!

If you play a C major scale starting on the note E, you’ll hear the Phrygian mode (pronounced fridge-ian).

Start on note four, or F, and you get the Lydian mode of C major.

While starting on the fifth note, or G, gives you the Mixolydian mode of C major.

Aeolian mode we’ve met as the minor scale. And lucky last is the Locrian mode, which starts on the seventh note (B in a C major scale).

But How Do I Use Them While Writing Songs?

The magic of modes comes from where the half steps fall. Let me show you.

If we play any two of the Ionian mode’s notes, we get these intervals:

As major as major can be!

But look what happens when we shift into Dorian mode. The relative widths of the intervals have changed compared to Ionian mode and now we get: Unison, major second, minor third, perfect fourth and fifth, major sixth, minor seventh and octave.

Soon you will start making melodies and using chord progressions with those intervals. And your songs will sound quite different!

Each mode also has a “signature” interval. When it appears in a chord progression or melody, it changes the feel. It lets the listener know something’s going on under the hood.

Have a look at the 3 column.

You can see three of the modes – Ionian, Mixolydian and Lydian – all have major thirds. And they tend to be thought of as more positive sounding or brighter.

The other four modes – Aeolian, Dorian, Phrygian and Locrian – all have minor thirds. So they tend to be thought of as darker.

This light to dark spectrum of modes is like a rainbow with seven distinct colours. Your palette of musical emotions can now expand from just ‘happy’ or ‘sad’ with Ionian major/ Aolian minor to using all seven musical modes.

Don’t let the music theory weird you out. You should always write what sounds good to you.

What I’d love for you to take away from this article is to be aware of these sounds. They can provoke an infinite variety of emotions.

Modes are mighty tools to knowingly have in your songwriting arsenal.

Here’s a list of great songs, each one using a different mode.

The vast majority of contemporary popular music is Ionian mode – but not exclusively.

Tom Petty and the Heartbreakers show us how it’s done with “Free Fallin’” in F Ionian.

As mentioned, the bittersweet sound of Dorian mode makes this hit something else.

The signature interval of Dorian is the natural or major sixth (G♯ in this case). This note distinguishes it from the flat or minor sixth of the Aeolian mode.

Watch out for it in the prechorus especially. Not sad, soulful. In B Dorian, “Get Lucky” sure did.

The signature interval of the 2♭ (minor second) makes this mode pretty dark. Disquieting at the least.

Radiohead use it to great effect in “Pyramid Song” in F♯ Phrygian.

Is anything happier than a major scale or Ionian mode? Not sure, but you can brighten it with a sharp fourth.

Not surprisingly, the theme song to The Simpsons is a hearty salute to Lydian life. C, then B, then E Lydian. Yeesh!

The flattened seventh keeps Mixolydian mode a whisker away from Ionian mode. The signature interval here makes it a favorite mode in contemporary pop.

You may well have used it without being aware of it (I sure have – duh!).

But the late great David Bowie used its uplifting feel in this piece of glory. “Heroes” jumps into D Mixolydian at the chorus.

“Losing My Religion” by REM went to the top of the Billboard charts with this beauty in A Aeolian (A minor).

Their most successful song is a terrific ode to the Aeolian mode.

Virtually everything is flattened except the fourth in Locrian mode. So the signature interval here is practically a pancake.

What the Strokes did with “Juicebox” is a great way to signal your use of a mode beyond Ionian or Aeolian.

Highlight it with a bassline, repeat the highlight. Make it loud, and put the root note or a signature interval on the down beat.

Another way to accentuate the mode is to use a signature interval note on the highest part of the melody. Or to give it a long note, which is what happens with the B Dorian’s major sixth in the prechorus of “Get Lucky.”

It doesn’t matter what your intention is with your song. Explore the idea of modes and the emotional dexterity they can offer you.

It could propel your music from meh to magic.

Modes are a powerful tool in your songwriting toolbox.

If you want to highlight an emotion in big bold letters, modes can help you do just that! 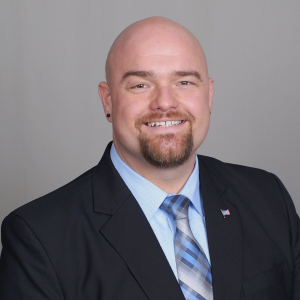