What’s one thing many of the greatest artists of our time have in common?

Think of artists like Johnny Cash and Amy Winehouse. Nirvana and Van Morrison. Drake and Eminem. Adele and Green Day.

They are unafraid to write songs that dive deep into heartache, despair, frustration, anger, and sorrow.

They all have minor chord progressions. These artists use minor chords to express and explore difficult feelings.

Read all about it right here, and you too can tap into a really cool songwriting technique.

But if you just want to learn about Minor Chord Progressions specifically, keep reading.

Why use minor chords?

Most of a song’s overall mood comes from whether it has a major or minor chord progression.

Major chords tend to sound bright and happy to us. Meanwhile, minor chords are dark and melancholy.

There are exceptions, of course. But making a song sound “sad” relies heavily on minor chords and their progressions.

Some genres are dominated by minor chords, like metal or some forms of EDM. The Billboard charts also lean towards songs that feature minor chord progressions. 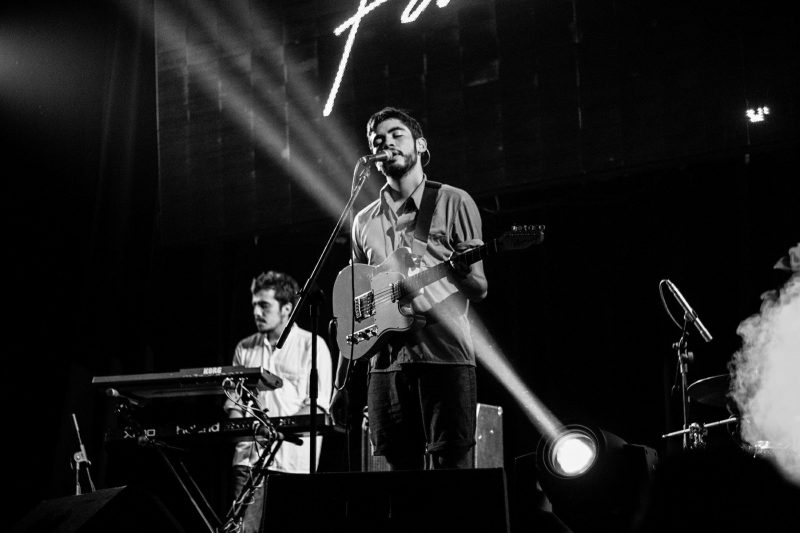 But what makes a chord minor?

Chords are made of three or more notes from the same scale. A basic chord of three notes, or triad, uses the first, third, and fifth notes from a scale.

A minor chord, on the other hand, uses the same 1st and 5th notes as the major chord, but the 3rd is lowered or flattened by a half step or semitone.

A flat note uses the little ♭ symbol. Major chords are said to have major thirds in them, but minor chords use minor thirds.

It’s the small change in the third interval that makes it sound minor. In minor chords, the 3rd note is now closer to the all-important 1st note.

You can see this on the keyboard diagram below.

When we hear it, it creates tension, or dissonance.

By bringing the pitches closer together, they start to clash. That elicits the sad or somber emotional response in us.

So how can we write chord progressions in minor keys and get that melancholy mood?

You can take chords from the scale of a key and create a chord progression with them.

Say I’m writing a song in the key of A minor. I can use chords made up of the notes from the A minor scale.

There are seven basic chords you can create just using the seven notes in this scale. (This type of harmony is called diatonic, and it’s used heaps in modern music.)

Here’s a trick to tell which chords to play next, no matter what key you’re in:

Instead of writing out chords, use Roman numerals. Uppercase for major chords and lowercase for minor chords. A superscript circle o is added for the diminished chord.

Every minor scale has 3 major chords, 3 minor chords, and 1 diminished. By using roman numerals, you can easily figure out which chords are major, minor, and diminished in any scale.

It’s a useful formula to remember.

Each minor key comes with its own set of seven diatonic chords (3 major/3 minor/1 diminished).

Let’s check this out in the real world!

REM had a smash hit with Losing My Religion using basically the same progression. But they ended the chorus on G major, which is the major VII chord of the A minor scale: Am-Em-Dm-G (i–v–iv–VII).

Bob Marley’s I Shot the Sheriff riffs on a simpler i–iv progression in the chorus (Gm-Cm). Then the verse uses the major VI chord to create a new variation on our chord progression,  E♭-Dm-Gm (VI–v–i).

This progression, the i, iv, and v chords, can be used for resolution, movement, and tension. But it isn’t nearly as popular in minor keys as it is in the major keys. 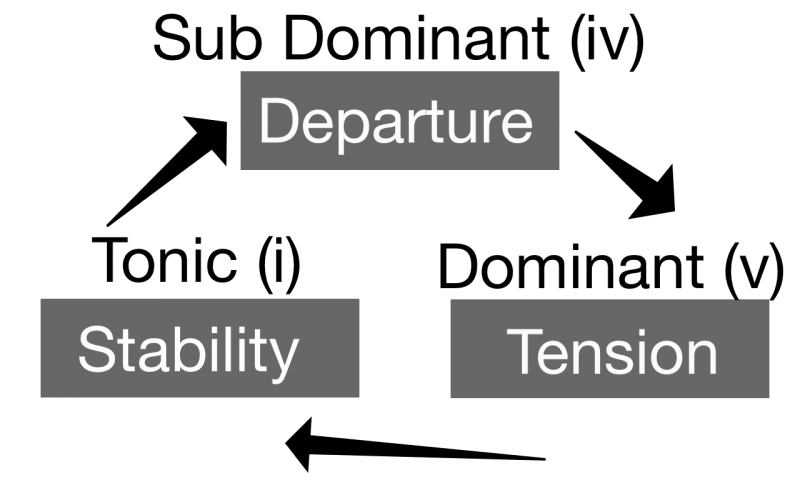 And here’s where minor harmony is a little more complex than major.

Before we move on, let’s talk about the problem with the minor scale: the minor v chord. The minor v chord doesn’t use a leading scale tone like its counterpart from the major scale, the major V chord. Because of that, it almost never sounds as stable.

So to give their sad songs some extra life, songwriters have been changing up the minor scale for centuries.

Two other variations of the “natural” minor scale are often used. They make sure there’s a raised 7th (the leading tone) and sometimes even a raised 6th. Yikes!!

Just to be clear. There are actually three seven-note minor scales you can use to make up your chords in a minor chord progression. There are as follows…

2) The harmonic minor scale, with a raised 7th

3) And the melodic minor scale, with a raised 6th and a raised 7th

But watch this, and it’ll be all right!

When you’re playing in a minor key, chords with the 7th note of the scale will often be different from those in the natural minor scale.

These three scales mean there are a lot of chord variations you can use in a minor key. 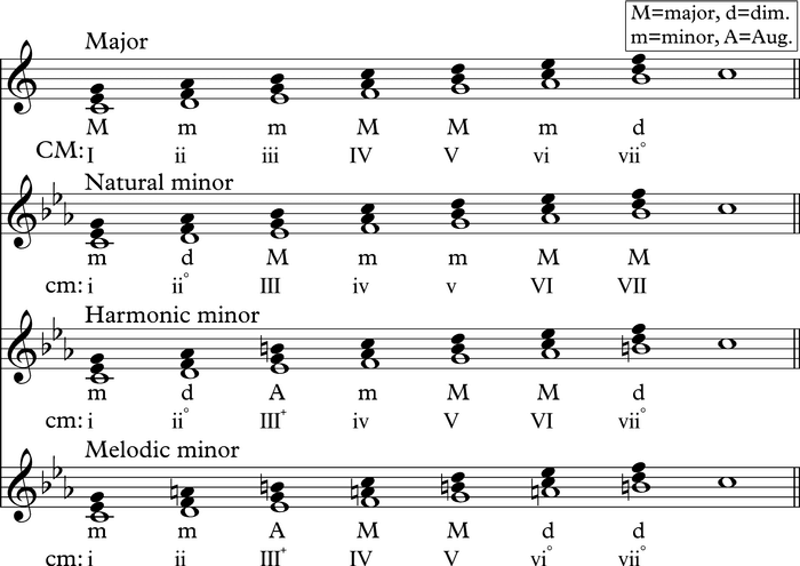 So now that we’ve gone over the three minor scales, let’s check out some minor chord progressions with the wonderful-sounding major V chord.

Here’s the music theory in action with TLC’s No Scrubs. It substitutes the natural minor scale’s minor v chord for the major V7 chord in Dm–Am7–E7–Dm.

The “down and back” progression is hugely popular.

The VII and VI chords are the relative majors of the v and iv minor chords. So you can easily substitute them into your songs.

For example, let’s look at the key of A minor. Here are the chords within the A minor scale:

Now let’s look at why our chord progression works. The VII chord G major shares two of its three notes with it’s relative, the v chord. Check that out below:

You can substitute either of these chords out for each other to get a different sound, just like in the progression above.

The same is true there! In fact, every chord has a relative that you can use to spice up your chord progressions.

The three major chords in the diatonic minor sequence III, VI, and VII get called substitute chords. This progression i–VII–III–VI uses all of them.

Adele makes great use of it in her hit, Hello. Other examples include Eminem’s Love the Way You Lie and Green Days’ 21 Guns.

TIP: When you use it, don’t linger too long on the III. It’s the relative major of the minor key you’re in. Your listeners might get confused about whether the song is major or minor.

Let’s say, for example, you’re writing in E minor (i). Too much time on III (G major) will makes us think we’re in the key of G major.

This variation of the “down and back” ends with the V7 in what is called an Andalusian cadence. It’s beloved by flamenco guitarists and heard in a great deal of Latin music.

Christina Aguilera put it in Genie in a Bottle, and Dire Straits used it in Sultans of Swing.

In minor keys, the second chord is diminished. It has a very distinctive sound and doesn’t turn up in popular music often.

But a certain version of this chord does. It’s called the half diminished chord, and adds a 7th onto the end of the ii°.

Let’s go back to our example key of A minor. In that key, the ii° is B diminished. As a triad, it uses the notes B, D, and F.

As a half diminished, it uses B-D-F and adds on the note A as a minor 7.

This is used a great deal in jazz chord progressions, like ii7♭5–V–i. You’ll also find it in jazz-influenced r&b, so don’t shy away!

To conclude, I hope this helped you. Minor chord progressions can open up a whole musical landscape for you to write great songs.

And if you want to experiment more with different progressions, the circle of fifths will help you find solid combinations

Where will you take us next with your next minor mood swing?